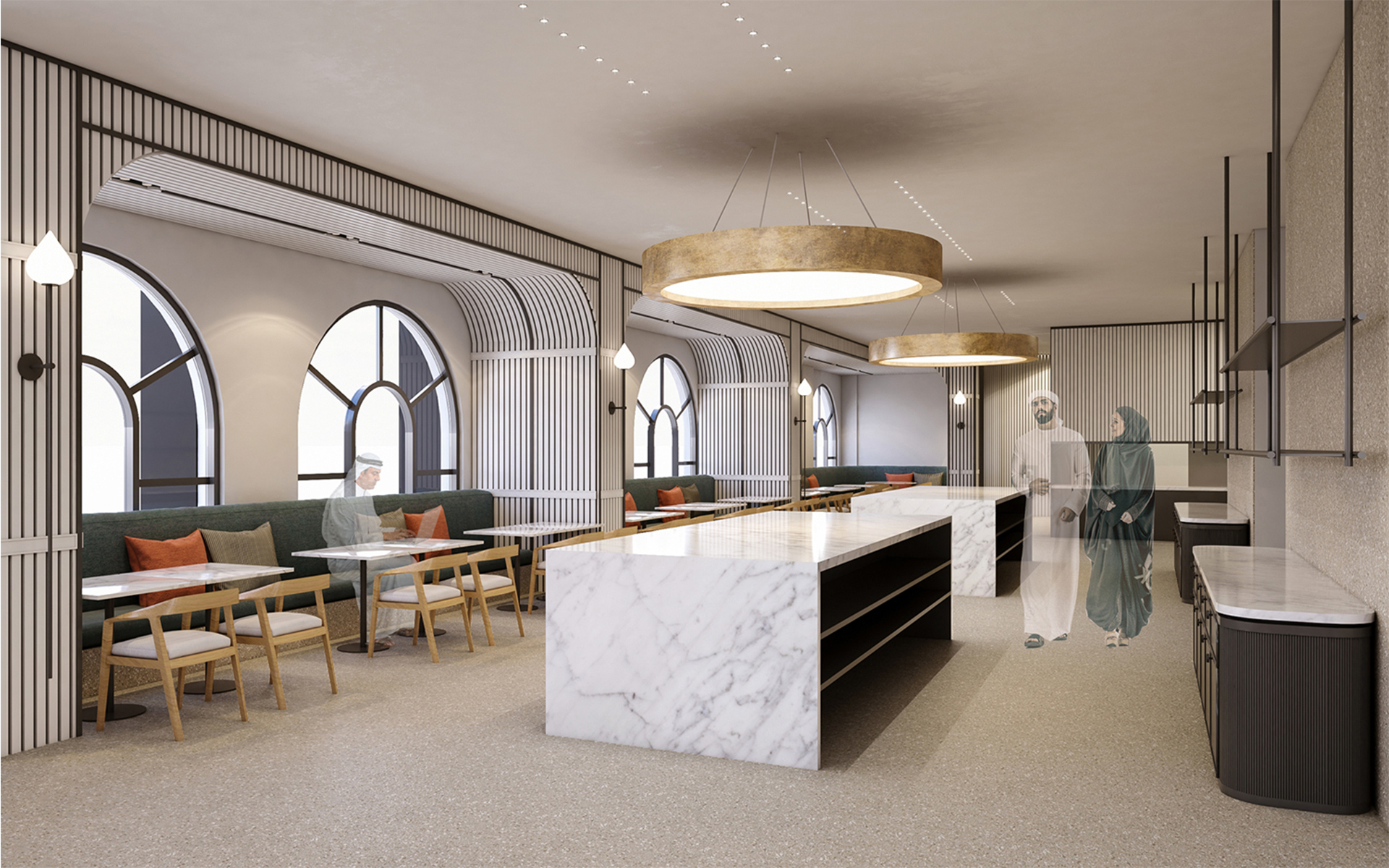 Located in Al Madina, Saudi Arabia, Otencia Hotel is a short walk away from the Islamic pilgrimage site of Masjid Al Nabawe. The challenge in this project was to extend the holy city’s modest architecture and pathways into the existing structure. This was achieved by introducing architectural elements and notions found around the city. Key words in this project include promenade, vaults, galleries, lintel, and ornamental inspirations.

Before intervening at the ground floor level lobby, the space was narrow, tight and unwelcoming. The first step of the intervention focused on eliminating certain walls, niches, ramp and steps, and closing of the void. The alignment of columns was then used to create grid before enlarging the entrances and adding openings. As a result, the area could be divided into four main zones with different activities: the concept store to sell locally made products, the waiting area, the reception space, and the bar and lounge.

This process not only helped create a well-defined and organized space, but also helped bring the city into the project. The opening up of the spaces and grid layout regenerated the notion of an architectural promenade through its walkways and arcades. In section, a series of vaults was reintroduced by splitting the arc into two communicating halves. Recessed seating was also embedded into the plans and section in order to create niches reminiscent of Al Madina historical architecture. A similar process was applied to create the restaurant. As for the bedrooms, the spaces were designed to accommodate two to four users taking into account that Al Madina is often visited for its pilgrimage site.

The architecture of the city was also introduced through the material of the project, mainly focusing on raw and dry tones. The main materials used in the project include concrete, terrazzo, wood, gun metal and linen fabrics as well as Carrera marble, white ribbed wood, and brass.

Patterns taken from the city were introduced through partitioning and screens, floor tiling and even furniture fabric. Al Madina’s patterns were a particular inspiration used to create the bedroom carpet’s gradient effect that starts strong at the entrance of the room and fades away on the inside.

The furniture itself was also chosen with particular attention to preserving the modest and earthy atmosphere of the spaces. This was done by choosing loose and contemporary furniture made of wood, linen fabric, gun metal, brass, and even concrete. Besides the furniture’s moveable and nomadic character, the light fixtures and suspensions follow a similar notion of a free and flexible presence. 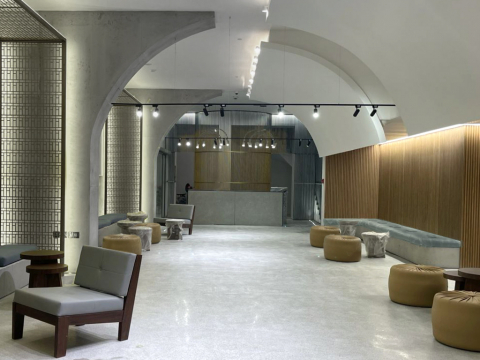 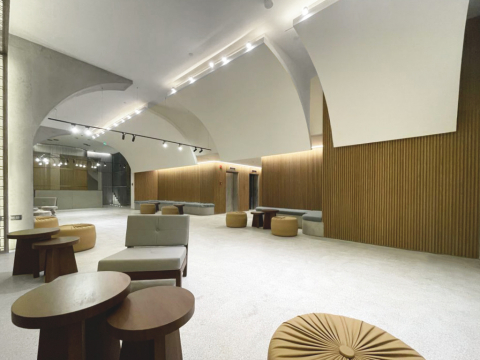 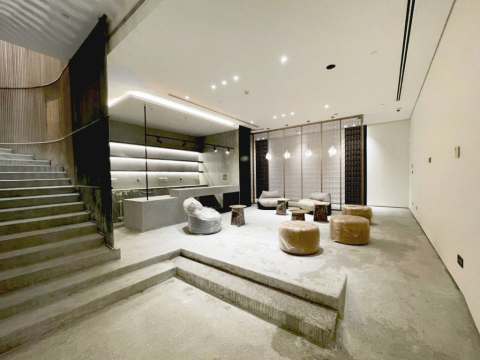 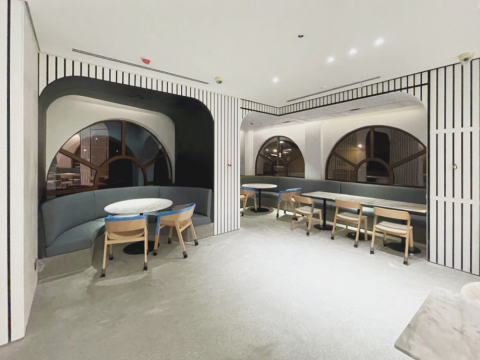 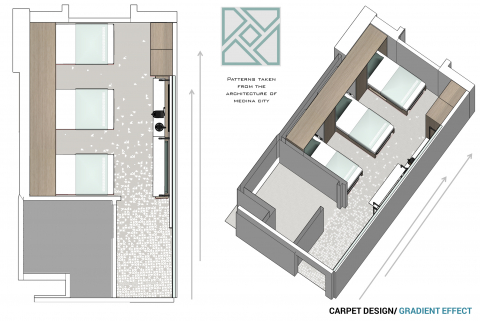 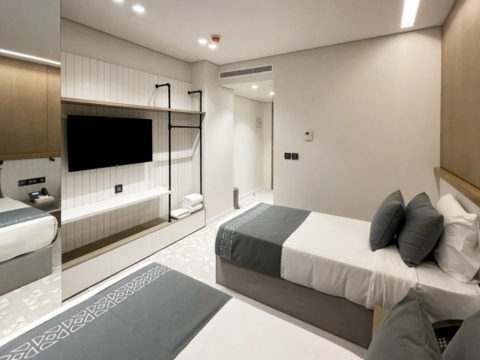 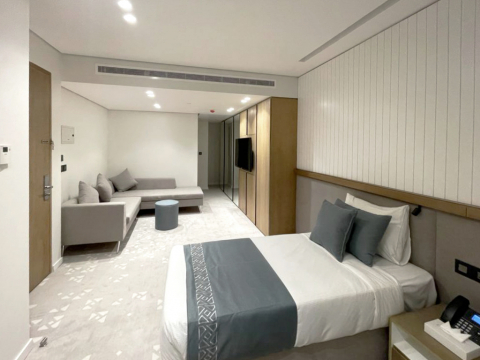 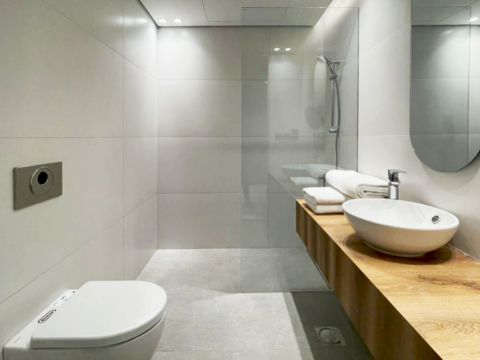